BACK BY POPULAR DEMAND !!

(Accessible by stairs only)

THE LEGEND COMES TO LIFE

or purchase at the door

MOST OUTSTANDING PERFORMANCE BY AN ACTRESS

“The nod goes to Jill Dalton for her Lizzie Borden in “Lizzie Borden Live.” She runs the gamut of emotions in her performance from that of a mild Christian woman to a ruthless murderer. Her reenactment of the murder of her mother (it was my stepmother!) and father is a chilling scene in this play and Dalton, who also wrote the script, vividly brings it to the audience.”

Dalton is nothing less than superb in her depiction of the character, as her Lizzie is alternating sweet, innocent, witty and savagely murderous. The audience is left to decide which Lizzie is the real one.”   Cape May Star Wave

“I heartily recommend you see Lizzie Borden Live. . . . complex and most interesting Lizzie, in the person of Jill Dalton.

“Absorbing performance . . . Dalton runs the gamut of emotions from supposedly mild Christian woman to that of a ruthless murderer.”

“Everything from Jill’s facial features (like Lizzie herself) to the way her voice can change throughout the play makes for compelling and oddly sympathetic viewing.”   Exit Zero

“Truly superb . . . the script is fascinating. Jill Dalton is an astonishingly talented actress – she changes her mood and characters in a split second. The play should get a Pulitzer.”

“Our audience comes to see Lizzie Borden Live expecting to find a monster….

and instead they find themselves.” Jack McCullough, Director of Lizzie Borden Live

FALL RIVER Aug. 27.—The examination of Bridget Sullivan was continued

in the Borden hearing, this morning, Witness said that Mrs. Borden  told her she and and Mr. Borden were sick on Tuesday night. They had been vomiting and looked sick when Lizzie came downstairs. Lizzie said she had been sick, but witness did not notice that she looked  unwell. Witness had never seen Lizzie in tbe barn. She recognized the laugh in the upper hall way, spoken of yesterday, as that of Lizzie Borden. The night before witness ate some of the mutton soup that had been warmed over several times, and next morning felt a little sick. She went out into the yard to vomit; it was at that time that Lizzie was eating breakfast.

Witness said Mrs. Borden told her, Thursday morning, after breakfast, to wash the windows, that morning. Witness was sure Lizzie had coffee and cake for breakfast She did not read any, that morning; witness drank some milk; don’t know whether others did or not, but do know Mr. Borden had some of it on his toast in the morning.

Since the tragedies occured, she had never seen Miss Borden crying. At the conclusion of District Attorney Knowlton’s questioning, Lawyer Adams began his Cross-examination of witness. An official who stands high in the government that he has no hesitation in saying he believes Lizzie Borden guilty of the murders. He bases his judgment largely on the evidence of Bridget Sullivan at the examination, yesterday afternoon.

Bridget’s testimony and witness statement don’t do much to alleviate the suspicion of Lizzie’s guilt.  The article above records some interesting statements.  The pressing question is, of course, why did Bridget change her mind about hearing Lizzie laugh at the top of the stairs when Andrew Borden came in the front door?  At the Grand Jury Trial, Bridget will claim “I don’t know where the girl was.”  It would also be interesting to know who the official “high in the government” was who, thanks to Bridget’s testimony, was convinced Lizzie was guilty.  And then, there is the great revelation that Andrew Borden was a “milquetoast” as he saturated his toast with milk. Perhaps it was stale- along with the mutton soup.

An article by Lucy Stone in the Newport Mercury June 1893:

A Flaw in the Jury System.

James W. Clarke, in the New York Recorder, discussing the present jury system, makes the following sensible suggestion in behalf of a woman juror in cases where a woman is on trial. Another jury reform suggests itself in connection with the Borden jury. Here is a woman put upon trial for her life, accused of a crime the alleged motive for which was a malicious enmity of  long growth against her stepmother,with the principal witness against her a woman—the whole case from beginning to end enveloped in a womanly atmosphere,and attended by circumstances of a domestic nature, of which the average woman would instinctively,and simply because she is a woman, be a better judge than the average man—and yet there is not one woman on the jury. I know that tbe law as it stands does not permit the presence of women on juries; but why not change the law, and correct another anomaly—to my thinking, one of the greatest anomalies—of trial by jury as it exists today? The old common law theory of the jury was that every accused person had a right to be tried by a jury of his peers or equals, drawn from the vicinitywhere the crime charged against him was committed. The centuries’ old assumption that is quietly made at New Bedford is, of course, that a jury of twelve men is not only a jury of the peers and equals, but of the superiors, of any woman who may be arraigned for trial. But the nineteenth century would seem to be old enough now to concede that a woman on trial for her life or liberty has the right to have equal sex representation on the jury that is to pass upon her guilt or innocence. Slowly, perhaps, but surely, the idea is growing that a jury ought to be composed of men and women, and that a woman especially should have a jury of her peers, not her sovereigns, as in the case of Lizzie Borden. LUCY STONE.

It’s been a rough winter in Fall River with plenty of ice and snow as the familiar name in the photo below will testify. 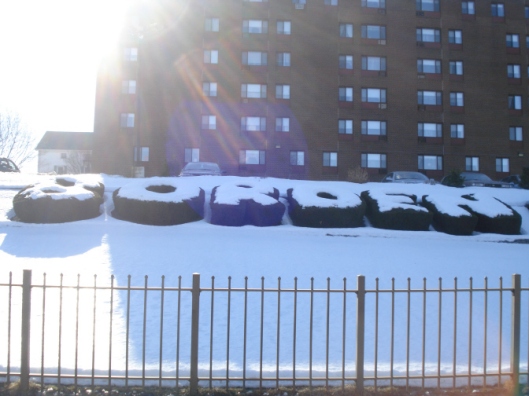 But work on the new court house continues slowly.  The building looms over South Main Street and the back of the building dominates Second Street just across from the Borden house.  At one time the twin spires of St. Anne’s and the single steeple of St. Mary’s were the landmarks easily spotted from the Braga Bridge top-now the court house steals all the thunder.