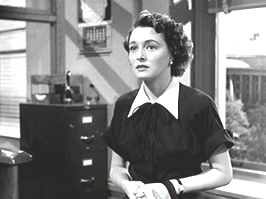 One of the first big celebrities to visit the Lizzie Borden Bed and Breakfast was Academy Award winning actress, Patricia Neal.  Born Patsy Louise Neal in Kentucky, the sweet-faced lady with the velvet voice would have an adventurous life filled with triumphs and personal tragedies.

This past week a popular old movie channel has been featuring The Day the Earth Stood Still, a film in which Neal starred as Helen Benson, the secretary and mother of little “Bobby”.  Her immortal lines “Gort- ‎”Klaatu barada nikto” is immortal among sci-fi enthusiasts.

Star of both screen and stage, Ms. Neal was challenged by a series of strokes in the mid 1960’s, and had to relearn how to walk and speak, but battled bravely back and continued working at her craft until 2009 in her last role in Flying By.

Neal died at her home in Edgartown, Martha’s Vineyard, Massachusetts, August 8, 2010, of lung cancer at age 84.  She had converted to Catholicism four months before her death and was laid to rest in the Abbey of Regina Laudis in Bethlehem, Connecticut.

On August 4th at the annual Pear Essential Players’ production at the Borden house, her visit to the bed and breakfast was mentioned when some members were discussing actresses who would be great in an accurate film version of the Borden case story.  Ms. Neal was at that moment at her home on Martha’s Vineyard, not so far from Fall River, and would pass away just four days later.

If you should find yourself on South Main Street in Fall River, just a half block south of Dwelly Street, you will see Hartley’s Pies, a famous local landmark in the city.  Hartley’s pies have been around Fall River for 100 years.  If you enter the little shop, you will see two enormous autographed photos of the late Patricia Neal.  The cook there has a copy of her obituary and will tell you how much she loved Hartley’s meat pies and how she never failed to stop in for a supply on her way to Martha’s Vineyard.

She was a great actress who was interested in everything, one interest being the Borden case.  She will be sorely missed on stage and screen. For more on her career, visit http://en.wikipedia.org/wiki/Patricia_Neal