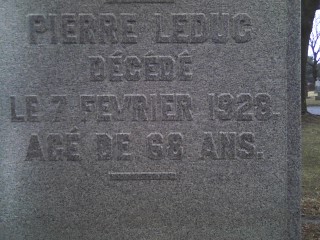 Andrew Borden’s final morning, leading up to the time of his murder was witnessed by many people as he made his usual rounds around the city.  A creature of habit, his daily pattern of barber, post office, banks, and check-in at properties he owned on South Main Street were predictable. He was noted by Abram G.Hart at the bank, encountered by store renter Jonathan Clegg on the street across from old City Hall, engaged in conversation by Mathers and Shortsleeves while checking on a window near the corner of Spring St. and South Main, and observed around 10:45 a.m. by neighbor Caroline Kelly coming around the corner of his house and going up his front steps, attempting to gain entry. Mrs. Kelly would be the last non-family member to see him alive.

Pierre LeDuc is listed as a “hairdresser” along with his partner Joseph LeDoux in the 1891-2 city directory, with their establishment on the second level over Wood and Hall’s shop, which was a furniture store that also had a side line in undertaking, a common practice at the time, supplying things for a funeral and offering wooden coffins for sale in their showroom.

Born of an English father (according to one source) and a French Canadian mother in May of 1864, the family came to America in 1870.  The stone marker in Notre Dame Cemetery does not list Pierre’s date of birth, only his death date. The 1900 census has his birthday as May 1864, but the marker has him aged 68 in 1928 which would have made his birth year 1860, the same as Lizzie Borden’s. On April 14, 1890 he married Marie at Saint Anne’s.

(click on image above to enlarge to full size) The 1910 census shows Pierre and Marie now living at 160 Robeson Street and they have adopted a daughter, Catherine.  With no children appearing since their wedding at St. Anne’s in 1890, twenty years later adoption completed the family. Catherine was born in Massachusetts. Pierre is listed as a barber. Interesting to note that while Pierre’s speaking language is English, Marie’s is listed as French.  In other census listings, Pierre and Marie Americanize their names to Peter and Mary LeDuc.  And what happened to Pierre’s partner, Joseph LeDoux?  In 1930 he is still barbering as an old man and living on Spring Street.  If you are fortunate enough to have a copy of Judith A. Boss’ book, Fall River. A Pictoral History (1982 and available on Amazon), you will see a young Pierre LeDuc posing in a jaunty boater hat and crisp white barbering smock in front of Whitehead’s grocery store. He is young and slender.  There is only the Fall River Globe’s account that Pierre gave Andrew Borden his last shave and trim the day of the murders.  LeDuc probably never thought this is what he would be remembered for in the future.