(Medical Examiner, Dr. Dolan)  “They (blood spots) were over the back of the lounge eighty six of them, in one cluster, as I say, describing the arc of a circle from the west, east that is, from the parlor door towards the kitchen door. I should say not over three or four inches east of his head [and describing a semi circle]. Some very minute, some the size of a pin head, others were the size of a pea, and varying from that.”

‘Further along towards the east on this picture, a picture framed and suspended above the sofa  On that picture and frame were in all forty spots. The highest spot there was fifty eight inches from the floor.
. . . They were more as though shooting directly upward, that is, diagonally from the head .” 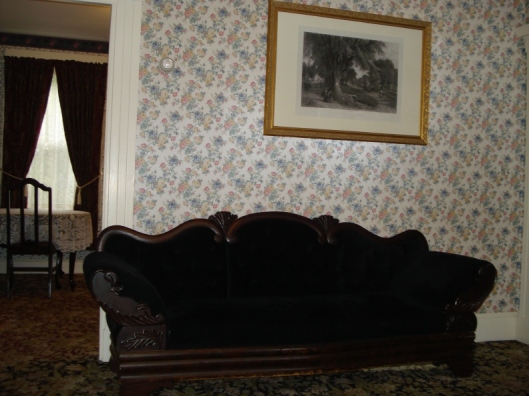 “On the door (to the kitchen) there were two spots.. . . If I remember correctly, I think one was three feet one inch from the floor in the groove in the division of the door. There was another one about six inches from the floor on the door proper, about quarter of an inch from the casing of the door.The one in the groove was a medium spot. I could not give you the measurement..  it was probably the size of a huckleberry, a small huckleberry.”

“I found one on the west door, the jamb of the door leading from the sitting room into the dining room.I did not measure it. I should judge from twelve to fourteen inches (from the carpet).It was not a spot, it was a string, as it were, of blood. Instead of being a spot of blood, that was long, it would probably measure, if drawn out, two inches or two and a half inches.”

Q. Do you recollect how the blood spots upon the parlor door in the sitting room appeared before they were washed off?

A. The one that goes into the parlor?

Q. The sitting room door, yes, that goes into the parlor.

A. There was quite a considerable many spots of blood on it.

Q. What portion of the door were they on?

A. Mostly from the knob down.

Q. Any above the knob that you noticed or recollect?

A. I dont recollect.

Q. Mr. Dolan testified that he thought there were seven or eight, what should you say as to that, were there more or less in your opinion?

A. On that whole parlor door? On the place that is now washed out, he counted ten, as I understood him.

Q. So far as you know that parlor door was the only place where there was any blood washed from, is not it?

A. It is all I know anything about.

Q. What should you say of the number of spots there was upon that door?

A. I never counted them, only just a rough estimate; I should say not less than forty, and maybe more.

Q. Was it, or was it not, sprinkled over the entire width of the door along the lower part?

A. Yes, all over the door, that is all over in spots.

Q. Can you tell what the location of those spots are, as to the large or small spots?

A. The largest ones were nearest to the bottom of the door.

Q. Did you notice what the direction of those spots were, whether there was a spatter and a direction which they appeared to take after they struck?

A. I think the heaviest part of them, if I recollect, was down.

Q. The heaviest spots were nearest the bottom? 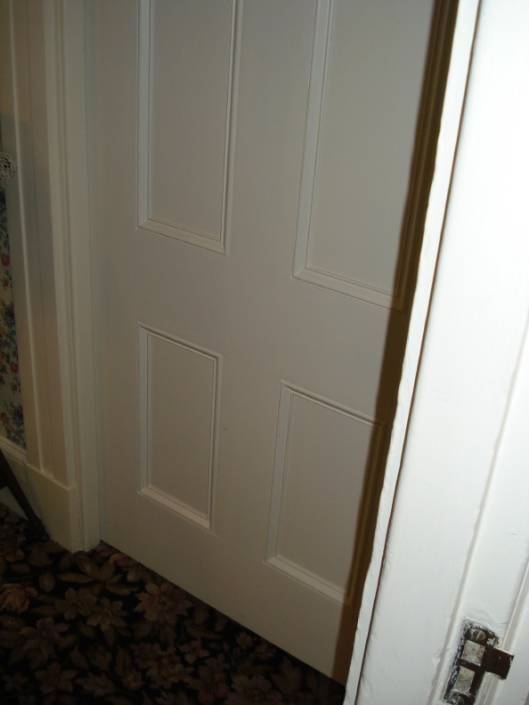