Alice Russell is one of the few major players in the Borden drama who is not buried at Oak Grove, and that being the case, she is rarely “visited” out in Westport at Beech Grove Cemetery.  Beech Grove Cemetery, where Alice reposes for eternity with her parents is not the easiest place to find either.

Alice must have seen plenty during her stay in the Borden house during the days after the murder, not to mention being the recipient of Lizzie’s tale of poison and impending doom the night before the slaughter on Second Street.

After the trial, Lizzie cut her old pal loose.  Alice had lived in the Kelly house, on Borden Street, and also at the corner of Prospect and Hillside in the Highlands-not far from Maplecroft.  Funny to think about Lizzie walking right by her old friend and giving her the cold shoulder.  Alice lived out a peaceful life as a sewing teacher, and taking whatever secrets she may have had with her to the grave. 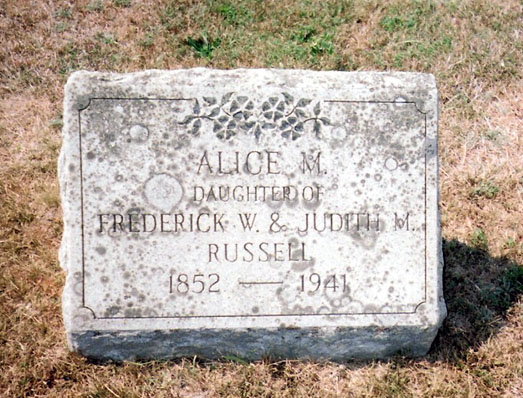