The annual Mutton Eaters weekend in Fall River 2010  is now just a good memory.  The armchair sleuth group had a jam-packed weekend visiting Lizzie Borden-related sites for three days, beginning with a stop early Friday morning at the Fall River Police Department on Pleasant Street.  Deputy Chief Moniz greeted the group in the entry foyer and took them to the second floor to meet the new Chief of Police, Chief Racine who recently took over the position from Chief Souza.  Chief Racine knew his Bordenia, and solemnly (with a twinkle) swore in 18 new recruits as “official deputies” on the Borden case.  The group enjoyed a great ten minutes chatting with the busy Chief, who mentioned there was a $200 reward on the “tip hot line” for any clue which would assist in solving a case. After reflecting on the FRPD and their involvement in the Borden case, the “Mutton Eaters” were treated, as a special surprise, to a complete tour of the entire facility from the booking room to the dispatch and receivng room to the holding cells.  The Wall of Chiefs, which included Medley, Hilliard and Fleet was a big hit as well as the arrest book showing Lizzie Borden’s name.  They learned that chief and deputy chief badges are turned in when the officer retires, and that the three numbers which appear over the badge are numbers of fallen policemen, killed in the line of duty.  Currently three numbers appear although the force has actually lost  more.  The badge has not changed style since the era of Lizzie Borden as witnessed by the badge of Chief Medley, Fall River’s first titled Chief of Police.  It was learned that the crime scene camera in the archive was not the one used by Mr. Walsh to photograph the Borden house, but was dated slightly after 1892. 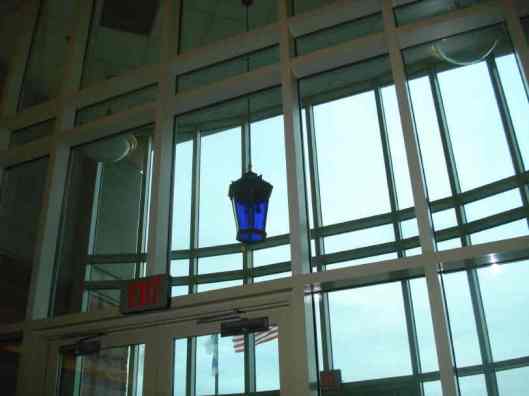 Original blue lantern from the old FRPD building at Bedford and High Streets.

The facilty was impressive, with the 24 hour dispatch and call -in room a state-of-the art- facility.  The night before the visit, Fall River sustained a large fire in a private residence, with the loss of one four year old child.  The dispatcher took the group through the procedure of how the calls were received, and how the response teams were sent out.  Also on the tour were the booking desk and a tour of the lock-up where sliding doors have replaced bars.  Male and female detainees are separated from each other in different sections of the building.

During the visit a review of a recent incident involving the discharging of an officer’s gun during a chase was being conducted, which is general procedure.  The briefing room was included and looked exactly like those seen on so many popular television programs.  The white board showed ongoing activity around the city, using the historic terminology for the sections of the city like Corky Row, Flint, Globe, etc.

The visit was a highlight of the weekend for the group, and the viewing of the arrest book a special memory along with the great kindness and hospitality of the officers and employees.