The weather was damp and drizzly Saturday and Sunday but did not stop the energetic bunch from outside activities.  Several cemeteries within the city were visited including Old North, Oak Grove, and St. John’s. The Mutton Eaters learned that Capt. Harrington is buried in the Leary lot, with no stone, which explains why the hunt was unsuccessful.  Old North contains the final resting places of Hannah Reagan (prison matron who overheard Lizzie say to Lizzie, “You’ve given me away, Emma”), Mrs. James D. Burt, a Borden neighbor, and Charles Trafton, for whom the house on Second Street was built.

A stop was made at St. Anne’s Church in the south end, and then on to nearby Kennedy Park to see the spot where Sarah Cornell was found hanged from a tree near the Taunton River.  Lunch was at McGovern’s where original Mutton Eaters Debbie Valentine and Barbara MacDonald joined the group.

After lunch the gang went on to the Lafayette Durfee house on Cherry Street where they were treated to a private tour and special exhibit for Patriot’s Day http://www.lafayettedurfeehouse.org/

The Hyman Lubinsky Ice Cream Social  followed at 5 p.m. and featured an amazing assortment of eatables including a birthday cake for Officer Harrington, whose birthday it would have been. Harrington was the policeman who had his doubts from the start about Lizzie and gave that detailed description of what she was wearing.

Very special guests arrived who now live in Dr. Kelly’s Third Street home, and brought with them an assortment of things found in the Kelly home which were unearthed from between the walls.  Dr. Kelly and his family lived next door to the Bordens in 1892.  Kitchen spices, photos and medical journals were displayed for the Mutton Eaters.  It is possible that one of the photos may be that of Dr. Kelly’s daughter Philomena Kelly who married the grandson of banker Abraham Hart (among the last people to see Andrew Borden alive). 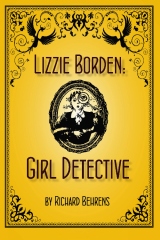 Former employees of the B&B dropped by and the evening ended with Lizzie quizzes and games, prizes, a reading from Richard Behren’s new book, Lizzie Borden Girl Detective, singing of  Lizzie’s favorite hymn, At Hame in My Ain Countrie, and some original Lizzie songs made up on the spot. Two initiations were held for new Mutton Eaters Molly and Will, both employees of Lizzie Borden’s Bed and Breakfast Museum.

Sunday saw several of the Mutton Eaters leaving early for home after breakfast at the Highland Ave. Spa.  The remnant had a great day antiquing in Bristol with lunch at Leo’s.  Everyone, to be sure, had a very good night’s sleep Sunday night- and plans are already being made for next year.