Sometime just before 11:15 a.m. on Thursday, August 11, 1892, the two bodies of Abby and Andrew Borden, deceased for a week, were removed from the hillside holding tomb where they had been shelved since August 6th- the day of their funeral at Oak Grove Cemetery. Holding tombs were required to receive the coffins during the winter months in New England when the ground was too hard to dig a grave.  This particular tomb has shelving on both sides and is built into a hill where the cool earth helps to preserve the body.  Today this tomb holds only lawnmowers.

The post card from 1907 shows the comfort station on the left.  Straight ahead in the center of the arch is the Civil War obelisk given by Col. Richard Borden in memory and honor of the fallen Union soldiers buried all together there..  Today the ivy has been cleaned off the arch which says “The Shadows Have Fallen and They Wait for the Day”. 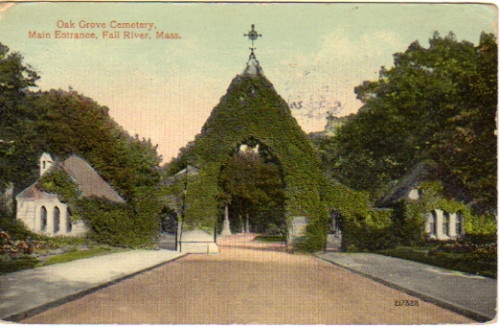 One can only imagine the proceedings within these walls, and the faces of the men as they exited this door, two unseemly bundles in hand.  The little building is of granite stone blocks, and is divided into two inner chambers.  On the left is the tiled lavatory with conveniences for the ladies and a sink.  The tiles are still there, including some ornamental tiles at the top of the wainscotting which feature a Greek key motif.  The room on the right still has the dark wood  panel wainscotting and wide window and door moldings.  The beautiful stained glass windows were vandalized long ago but shards of lavender and nile green glass jut from the lancet frames behind the boarded up openings.  This is the room where the grisly deeds were done, and the room from which the sad, headless corpses of Abby and Andrew were taken to be laid forever headless in the damp earth.  The heads were eventually buried after the trial, in separate small boxes over the top of the coffins.  The workmen today know this story and sometimes look uneasily around their “break room” when the story is mentioned.  After all of this, the good doctors washed their hands in the lavatory, and went home to their lunch. 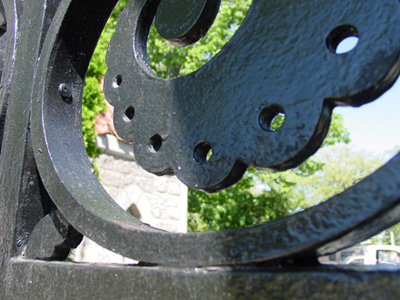 The door from the waiting room into the lavatory featuring wide molding and panelled wainscotting.

Corner of the “autopsy room”

Sounds like an exotic disease but actually taphophilia is the love of old monuments and cemetery statuary, tombstones, memorials and well, stones! Oak Grove Cemetery, the final resting place for so many players in the Borden saga, is a true mid-nineteenth century garden cemetery inspired by Cambridge’s Mount Auburn, near Boston. The nearly 100 acres of winding pathways is a taphophile’s delight of heavily carved marble and granite, full of Victorian symbolism. Below is a representative of the personification of sorrow clutching a wreath, clinging to the Cross, the holding tomb where the Bordens were held for a week while awaiting a second autopsy which was done on the cemetery grounds, and the marker for Abby Borden’s half-sister, Mrs. Whitehead, whose Fourth Street house caused so much tension between Lizzie and Emma and her father. Click on photos for a larger view. (c) All rights reserved. 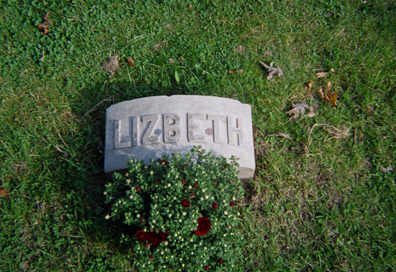 Today marks the 80th anniversary of the death of one of Fall River’s most notorious citizens.  Estranged from her sister Emma, Lizzie would die without family near on June 1, 1927 after declining health following gall bladder surgery.  Emma would follow her nine days later,  There may be no flowers at Oak Grove Cemetery today to mark this milestone year’s mind, but Lizzie’s legend lives on eighty years after her lonely demise.